In this interview in our CEO Series, we speak with Tracy Taylor, Chief Executive of Nottingham University Hospitals. We delve into how elements of her leadership have changed over the past 6 months, as well as discussing population behaviour and how this has come to the fore during the pandemic.

Tracy also provides advice for aspiring CEOs and aspiring leaders, we discuss key technology projects, as well exploring the value MS Teams has had for her organisation.

Can you tell me about your path to becoming a CEO?

I began my career as a Registered General Nurse (RGN), where after working as a Ward Sister in gynaecology, I moved out into the community and became a School Nurse and studied a degree in health visiting. Later, I studied a masters in health and social care policy. When I was working as a health visitor, I felt there was something more that I needed; I remember having a meeting with my general manager and director of nursing and saying to them “I’m not quite sure what I want to do, but I am sure what I don’t want to do, and that’s become a manager!”.

I had at that time, grand plans to work across the primary and secondary care interface in developing pathways, but before I could come to any proposal my manager went on secondment into a more senior role and advised me to apply for his job. Initially, it was a 12-month secondment – I have never looked back. I then went through a variety of managerial posts before taking my first director role as Director of Performance and Organisational Development in a PCT, to be further encouraged to take an MD role and subsequently become a CEO.

I have been a CEO now for 13 years. I never aspired to be a CEO in all honesty; I was encouraged at different points in my career journey. My philosophy has always been ‘if I have something to offer and something to learn then it is an opportunity’.

How has your leadership changed over the past 6 months?

I have thought about this, and I don’t think my leadership style has changed, however, I do think there are elements of it that have been more emphasised during Covid. I think that I’ve been very reflective about leadership and the type of leadership that most of us aspire to; we do not always get this right in the jobs that we do. Your staff in your organisation are the most valuable resource that you have, and as a leader, it is your responsibly to ensure your staff have the skills and competencies that they need to do the job as well as they can. Also, to inspire them and support them in terms of career development. Being a clinician by background, I’ve always been convinced that you have to empower people to do the right thing! I’ve always had a mantra around clinically led and managerially supported; I’ve not always got this right in every job that I’ve had, however, those two aspects were so important during Covid.

From a clinical empowerment perspective, the only people who knew precisely what to do in the height of the Covid crisis were clinicians; the operational managers really came into their own with identifying the challenges and risks and asked “can you support us?”, and so as a leader you do the checks and balances and support the implementation. This was a key and central part of the approach that we took.

The health and wellbeing and support of staff was all magnified during Covid, due to the impact of people’s lives outside of work. Work-life balance is crucial and my leadership changed in a way that it was very much about the clarity on the leadership and support in that space. I was doing monthly video blogs for staff and changed to doing those weekly; I was really open and transparent about the issues, such as PPE; I’m doing my fourth open letter to staff and the population; I also did a children’s blog which took the form of the story of staff, to explain to children the reasons why their family members had to come to work – the feedback from this was phenomenal.

There were some periods where I felt like I wasn’t doing enough, and as a former nurse, when there is a crisis, your inherent modus operandi is to get stuck in and start to help; I couldn’t do that because I had a different role to play. This demonstrated to me that when the chips are down, take a step back and allow staff to do their jobs with your support.

What technology do you think has been the most useful over the past 6 months?

MS Teams has been my world! I didn’t even know that MS Teams existed prior to Covid, and now, I do nothing other than MS Teams! The program’s ability in allowing us to continue what is almost business as usual through the organisation of vital meetings with the board, other stakeholders, and most importantly staff, has been invaluable. MS Teams has been key, and we had to embrace it rapidly. We have a medical staffing committee every quarter, where prior to Covid, we had a video link with both sites where the maximum attendees hit 12 people at a time; we are now doing meetings over MS Teams where we have around 120 attendees! This is due to not having to come out of theatre/clinic/wards, having to change clothing, and/or get to a location; they can dial in from wherever they are, and we are now having a much broader, deeper and effective dialog, with a broader number of consultants. We would never have thought to have used MS Teams for this before and is now something that we will continue to do as we go forward.

From a technical perspective, we use Nervecentre as our live system, and what we wanted to do was to minimise the number of people going on and off wards to halt the virus spread. We started to use a photography module in Nervecentre and we were capturing over 4.5k images per month. This was so the multidisciplinary team could virtually get together and look at a multitude of sites including surgical, without having to go on the ward and be face to face with the patient.

We also deployed a Dr Doctor video consultation tool, because we had already started doing pilots around avoiding face to face appointments through video consultations and we had a two-year plan to broaden that out; the plan was completed in only 4 weeks! We are now rolling this out Trust wide and we are not looking back!

Also, we implemented a radiology reporting system so that all consultants working from home could see images and scans. There has been a great amount of technology we have implemented at pace, which we will now continue with going forward.

Are there any learnings or advice you would like to share from your experiences over the past few months?

Because the pandemic restricted people attending the Emergency Department, they tended to begin to access healthcare more appropriately – calling 111 for advice, attending their pharmacy, calling their GP to have a conversation rather than attending in person, and actually the tolerance of that was very high; the feedback we’ve had around video consultations has been extremely positive.

We probably do underestimate the population expectation, and their behaviour is perhaps driven by what we have available. What I wouldn’t want however, is people not accessing the right service at the right time.

What advice would you give to those aspiring to take on the role of CEO?

The best CEOs are those people who have really thought about what the role means. My advice would be really think about why you want to be a CEO; it is the best job in the world, probably the most stressful, but it really is a privilege. I feel privileged every day to have the job I have, to be able to lead fantastic people who do such fantastic things. Think carefully about why, and the values that drive that ‘why’.

Also, coaching, mentoring and support is really important; I learn something new every day, and I’m not embarrassed to say “I don’t know” – people think once they get to CEO level, they should know all the answers – you are absolutely not expected to, and if you think you do know everything, you are not in the right space. Becoming a CEO is another stage in your learning and development: embrace it!

Finally, you should be aware that you are only as good as the people who work for you and with you; you have to be able to have a high level of trust and confidence in the people you work with; it allows you to understand people are doing the right thing, in the right way, and for the right reasons. 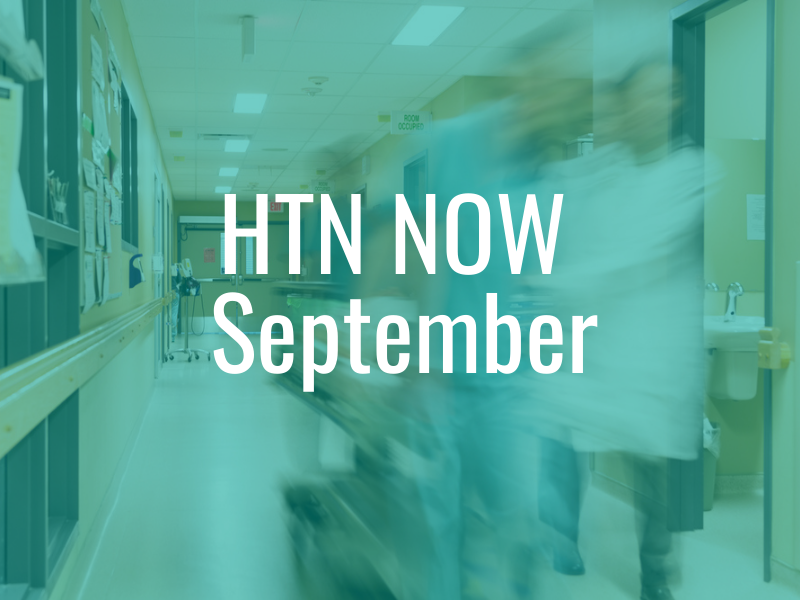 Join us for HTN Now 20 -23 September, our virtual event series.