In a session screened on YouTube, entitled ‘NHS Robotic process automation’, Darren shared case studies and provided examples of how the technology can help NHS leaders and staff in the ‘here and now’.

“The core goal is to make our staff more efficient – make all the hours they spend at the NHS more enjoyable, spending more time with their patients,” Darren explained.

“I think it’s important to understand what a robot can do for you. Notice I use the term ‘robot’ – a lot of suppliers and vendors in the marketplace use the term ‘virtual workers’ or ‘digital workers’. To me, a robot is less threatening – we can visualise what a robot looks like, and a robot is almost a way of supporting staff in the workplace.”

“RPA is sophisticated software that allows me to mimic what a human can do via a keyboard and a mouse, into any application. The only time I have difficulty is when I need a physical pair of hands…there are different levels of challenges depending on the platforms we’re automating into…but we can pretty much do anything.”

Darren presented a wide range of examples of what RPA technology can do – or is already doing – for the NHS.  “We can do things like language translation – the ability to translate into 60 different languages in real time. And in fact we’re starting to do that to send patient letters out in their native tongue,” he said.

“We can look at a chunk of text and apply sentiment analysis. Is that positive or negative use of language? To look at things like job references or even, potentially, clinical reports. I can take unstructured data and make sense of it by applying algorithms. That’s been used, for example, in pre-booking order comms of cardio-respiratory patients.

“The important point is this technology is not new tech, it’s relatively old tech now. It’s changing at such a fast pace we just need to keep up with it. Think of it as a notion of having robot workers in a cloud that can service any area of the NHS.”

Darren turned to recruitment and ‘corporate, back-office’ tasks to underline how RPAs can save time.  He said: “Invoice processing, finance reports. All of the Royal Free’s recruitment process is running on a robot – around sending out conditional offers, doing job references, doing ID checks…it works very well.”

The CTO later went on to return to the recruitment point, estimating that 35-45 minutes could be saved per applicant offer, by ‘enlisting’ robotic assistance.

Moving on to the more ‘eye-catching’ clinical process support, Darren explained: “Up until we did it, it’s safe to say it was a bit of a ‘holy grail’ – how will we let a robot deal with a patient pathway?

“We’re doing work around referrals…two-week wait for cancer…order comms management…anti-body testing. You name it, within clinical we would have done it and we’ve been involved with that.

“But where the automation is really great, is fixing some of the here and now issues…appointment rescheduling, cancellation, rebooking.

“I even had an example in my old trust, where we were getting text messages from patients saying they wanted to cancel their appointment. But just because staff were busy…that appointment wouldn’t be cancelled, which means it goes to waste.”

From his outcomes, Darren mentioned being able to give Colchester Hospital additional 13,000 slots a year through a simple automation process, as well as delivering nearly 80,000 hours worth of time back to East Suffolk and North Essex [NHS Foundation Trust], over a two-year period.

From his hub at the Centre of Excellence at the Royal Free, Darren and his team can provide a “six-stage automation life cycle” and a “massive library of work that can be repurposed and used” with over 120 different processes.

But for Darren, it’s all about sharing the knowledge, as his team assists trusts across the country.  “There [are] about 30 trusts now all on a common platform. So if you think about the ability to collaborate and share and repurpose our solutions, it’s absolutely huge. And that’s the key benefit here, it’s not about starting again from scratch,” he added.

Darren and his team also created the NHS Digital Exchange, which he says is “in the whole spirit of ‘for the NHS, by the NHS'” with anyone now able to “go into that library now and download bot code that will allow you to interact with ERS, access the referral, download all of the attachments.”

As well as showcasing robotic process automations currently making waves in the NHS, Darren looked back at how the pandemic gave him platform to prove the effectiveness of RPA technology.

“In less than 24 hours – it did almost kill me – I delivered two nationwide processes for delivering NHS mail accounts to every care home in the country, as well as sharing over 1 million unique shopping vouchers from Iceland to care homes…run out of a central platform,” he explained.

But, as is to be expected of someone working at the forefront of tech solutions, Darren is also keeping an eye on the future with new innovations.

“What we’ve done at the Royal free this year specifically…is fairly quickly, in less than a week…we created the [in-house] Flu App,” he highlighted. “The robot sat behind that and updated ESR and cohort. So what that gave the Royal Free for the first time, is a paperless flu vaccination programme, but real-time tracking of which wards have been done, which cohorts of patients, saving loads and loads of time – we think about 14 weeks worth of admin time.

“Through sharing and caring, we offered that to every trust in the country to take for free and to use it. And that’s kind of what we’re all about.” 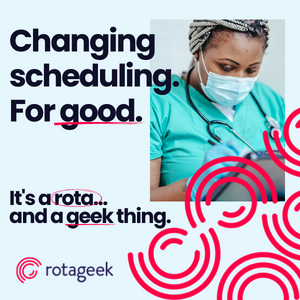